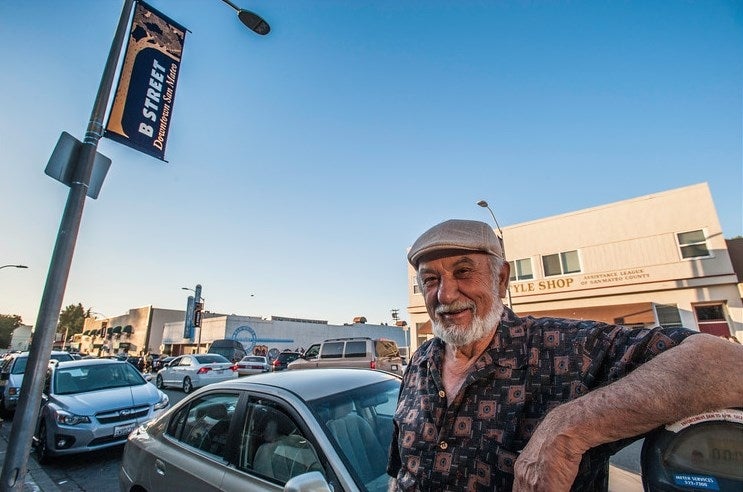 Small, locally-owned businesses—such as those on North B Street in the City of San Mateo—can be important contributors to a neighborhood’s wellbeing. In addition to offering essential goods and services, these businesses provide employment for local residents, an essential aspect of community health.1 ,2,3,4,5,6

Retail is the third largest employer in San Mateo County.7 Studies indicate that small businesses owned by people of color have been shown to be important sources of jobs for people of color – who face higher-than-average unemployment rates. 8,9 Small business owners tend to live locally and therefore spend earnings locally, supporting a strong local economy.

Additionally, small businesses help create the strong cultural identity, leadership, and social cohesion that enables communities to thrive.10,11,12 Ethnically serving businesses in particular support a vibrant cultural connection and provide niche goods and services often not found in traditional environments. While small businesses are an essential part of a healthy community, they can be extremely vulnerable to displacement due to rising rents and incoming business competition.13 Therefore, protecting and enhancing small business corridors is critical to ensuring diversity and stability in the local economy.

The City of San Mateo’s North B Improvement Initiative provides a successful model of small business preservation and healthy, equitable economic development. This publication presents a case study of the initiative and synthesizes key strategies for other jurisdictions interested in supporting and retaining small businesses.

North B Street is a vibrant, one block strip of largely immigrant-owned small businesses at the northern edge of San Mateo’s downtown. On North B, the smells of taquerias, a Peruvian grill, and other restaurants waft past grocery stores, small shops, social service providers, and a community center. Many of these businesses serve the adjacent North Central Neighborhood, a district with much higher rates of poverty (37% vs. 22%) and Latino (46% vs. 27%) and Black (4.3% vs. 2.5%) populations than the rest of the City.14 While most businesses had been on the corridor for over ten years, almost none owned their building, and some had only month-to-month leases—making them extremely vulnerable to displacement. One merchant, for instance, had made $20,000 worth of improvements to a building for which they had no lease whatsoever. While North B is technically downtown, it has been largely overlooked by public and private investment – until recently. A long neglected street, North B has been considered dangerous for pedestrians and drivers.1 Also, many shopkeepers and patrons have felt unsafe due to public drunkenness.

The Catch-22 of Investment and Displacement

Many disinvested areas like North B face an unpleasant catch-22. Often these areas are desperate for improvements such as safe streets, goods and services, jobs, and other amenities that make a healthy community. Yet when these improvements are made, they increase an area’s desirability and often spur rapidly escalating property values and rents. Indeed, many cities intently use public investment to boost property values and expand their tax base. While a benefit for property owners and city assets, surges in property values and rents can place low-income residents and merchants at risk of having to relocate or close up shop.15, 16 As neighborhood-serving shops are replaced by new upscale establishments, existing residents may begin to feel like outsiders in their own community, unable to purchase affordable, culturally relevant goods and services, or pay for the rising costs of housing.17,18 Many corridors in San Mateo County are vulnerable to this pattern. The booming tech economy has sent housing, office, and retail real estate markets skyrocketing.19 And with little space and sometimes political will available to support new development in many parts of the county, upscale retailers are increasingly competing with other merchants for scarce storefront space.20,21,22,23 This can drive up rents and displace small, lowcapital businesses such as those on North B.

Given its challenges and proximity to bustling downtown, some in San Mateo felt that North B Street should be redeveloped completely without a focus on existing merchants. However, the City chose a very different approach — announcing an initiative to dramatically improve North B with a focus on existing merchants and residents. This was prompted by a proposal from an existing local ethnically serving merchant, Mi Rancho Grocery, to expand its operations on the corridor. Marcus Clarke, then San Mateo’s Economic Development Manager, developed a vision for the initiative that focused on making North B safe and clean, while proactively working with local businesses like Mi Rancho to make sure they were prepared to weather the potential storm of rising property values and rents. Marcus made sure this focus was clear from the start, cultivating the strong support of the City Manager and Council. The City convened a multidisciplinary staff team, made up of the representatives from the San Mateo City Council, San Mateo City Manager’s Office, the San Mateo Police Department and the City’s Economic Development program. Backing from the City’s leaders gave this team the financial and political resources to ensure the project was done right.

The backbone of this initiative was a strong, proactive, and bilingual outreach process to identify merchant needs and visions for the corridor. The City pulled in outside partners to lead North B’s Commercial Anti-Displacement Policies

These partners maintained a near constant presence on the corridor, walking it weekly to meet with merchants, and conducting over a dozen focus groups, dialogues, and educational meetings. The Peninsula Conflict Resolution Center’s existing strong ties with community members were critical in building trust with merchants who reported they had previously felt neglected and burdened by city programs and enforcement. It was also crucial to clearly communicate the initiative’s intent to support and retain businesses, rather than spur outside investment and gentrification. This outreach process helped define a clear merchant vision for the corridor — a cleaner, safer North B, clearly connected to the Downtown, but with its own unique character.

While fully realizing this vision will take years, the City moved quickly to enhance the area through incremental, low-cost improvements. Clean up days were organized, and façades and alleys were given a facelift. The City made much needed sidewalk repairs, and installed new planter boxes, plants, fences for vacant lots, and banners that spoke to the character of the corridor and neighborhood. In addition to these physical improvements, the initiative worked to highlight the corridor’s unique culture, extending two downtown festivals to the corridor and encouraging the Downtown Association’s Artist in Residence, Loma Watt, to create North B’s emblematic yarn covered squid tree. To address public drunkenness on the corridor, police trained local merchants on safe alcohol sale practices, and worked collaboratively with them to prevent unsafe and unruly behavior. This proactive outreach and relationship-based approach to improve public safety was essential in a predominantly Latino community that has historically felt unsafe around police.

Recognizing that these quick wins were essential to building trust and momentum, the City distributed maps highlighting both completed and planned progress (Fig. 2). Longer-term changes are slated to start in 2015. Mi Rancho plans to break ground on their new building, and the City is gearing up for $400,000 of improvements including safer intersections, crosswalks, streetlights, trees, bike racks and other infrastructure. The merchants and residents are seeing their vision come alive.

Wins for local business, the City, and residents

The North B Improvement Initiative is a novel, proactive approach to prepare small businesses to weather the storm of potential rising rents and the threat of displacement. Project staff provided one-on-one support, often referring merchants to the San Mateo Small Business Development Center for more in-depth coaching. Staff also helped business owners understand the City’s ordinances, so that they could change practices or physical conditions before police or code enforcement visits. This education before enforcement strategy not only improved conditions on the corridor, but also helped build trust between the merchants and the City. Additionally, the City is developing a façade improvement program to help merchants keep their establishments competitive.

Most importantly, the team supported businesses in negotiating long-term leases with their landlords. With solid financial plans and stronger leases in place, North B’s businesses are much better positioned to not only adapt to potential market changes but actually improve and grow their businesses.

While much work remains to be done, North B has already seen dramatic improvements. The corridor is cleaner, and merchants and customers anecdotally report feeling much safer. Additionally, North B is more connected to the overall fabric of the downtown and opportunities for business development, with recent public events drawing several thousand new visitors to the corridor. While no formal assessment has yet been conducted, it appears that businesses are succeeding, and are better prepared, even as property values climb. The most significant change has been an increased sense of community and trust between the merchants and the City. The slow, proactive, and genuine outreach conducted by the project team has paid off, leaving lasting relationships among merchants, the project team, and city staff.

The North B Improvement initiative offers a number of lessons for other jurisdictions interested in cultivating and protecting small business corridors. Here’s some of the key strategies for successful projects:

Build Consensus Among City Leadership and Staff to Support and Retain Existing Businesses:

Work with city leadership to get clear about project goals—including support for small business retention/anti-displacement strategies. This will help locate appropriate resources and build trust among partners, merchants and residents who might otherwise be uneasy about the potential for gentrification and displacement.

Support Before Investment or Enforcement:

Before making infrastructure improvements or stepping up enforcement in disinvested corridors, pass anti-displacement policies and help merchants secure longer-term leases, develop businesses plans, and understand the city’s laws. With this foundation in place, small businesses will be more ready to improve conditions and weather the storm if property values and rents rise.

Good community outreach takes forethought, time and dedicated resources. Plan for significant outreach, in appropriate languages, during project conception, planning and implementation. Face-to-face outreach is often essential, and in some communities, it can be important to have trusted third parties to ease barriers to trust.

Continually communicate a project’s goals and ongoing progress, in appropriate languages, online, in print, in-person, and through other media. This can help ease fears, build momentum, and establish stronger community networks.

For more information about the North B Street Initiative contact Rebecca Zito, Communications and Marketing at the City of San Mateo: (650) 522-7005, rzito@cityofsanmateo.org or visit www.northbstreet.org