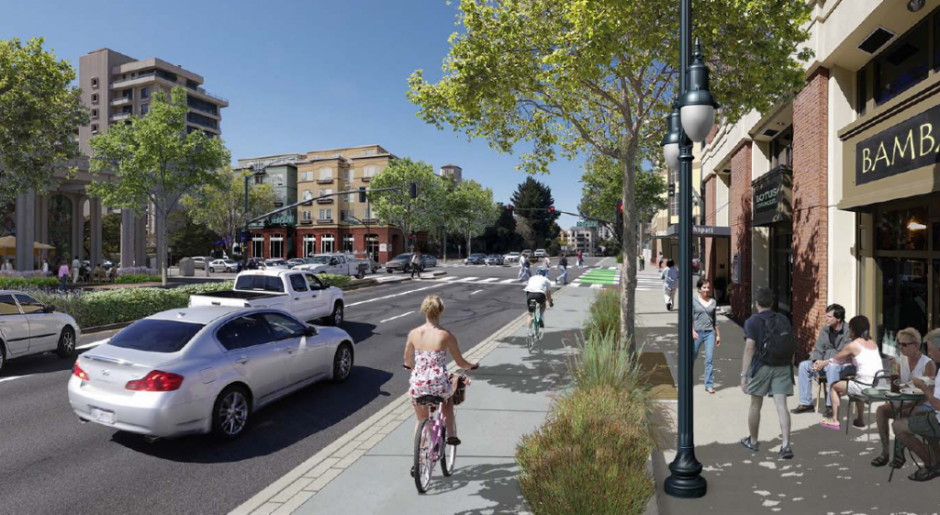 The Sustainable Streets Plan lays out detailed design guidelines for complete streets, envisioning “a transportation system that is sustainable, safe, and healthy and supports a sense of community and active living, where walking, bicycling, and transit are integral parts of daily life.”

San Mateo is now the third city in California to adopt a Vision Zero policy (after San Francisco and Los Angeles), committing to eliminating traffic deaths in near future.

Typically, between two and four people are killed and 40 people are injured by car drivers while walking in San Mateo each year. Most collisions occur in “hot spots” at major intersections downtown and along El Camino Real.

“No loss of life is acceptable,” said City Council Member Joe Goethals. “We can do better, and this plan is the road to doing better… My biggest criticism is the talk about this taking decades and decades. It can happen faster than that.”

Under Vision Zero, San Mateo staff are instructed to review the locations and causes of traffic collisions every year, and propose street and/or sidewalk modifications “to improve walking and bicycling conditions at intersections with the highest rates of collisions.”

The plan also calls for some specific street redesigns, including a sweeping overhaul of El Camino Real from 2nd Avenue to 9th Avenue through downtown San Mateo.

The plan calls for a six-to-four lane road diet on this stretch of El Camino, which is already four lanes wide immediately north of 2nd Avenue. The redesigned street would feature 15-foot wide sidewalks “to provide space for street trees and Green Street treatments” and raised protected bike lanes in both directions. 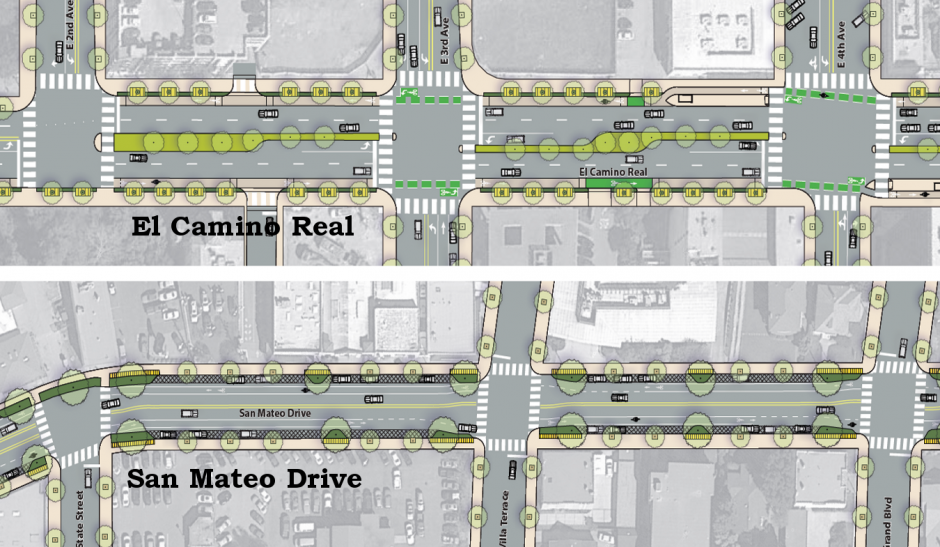 City planners are currently seeking $400,000 from the county’s City/County Association of Governments (C/CAG) for the $1.4 million San Mateo Drive road diet/streetscape project, and will pitch the funding request to the agency on February 26.

Recognizing the long-term negative impacts that “widening roads or adding dedicated turn lanes to increase auto capacity” has on public health, safety, and mobility, the Sustainable Streets Plan also recommends scrapping the city’s use of automobile Level of Service (LOS) in its development and environmental review processes. Similar reforms are on track to become standard in California cities, but San Mateo isn’t waiting.

The plan identifies a specific alternative metric to LOS — the amount people drive per capita. The switch would mean that instead of making more room for cars in a bid to reduce delays for motorists, city policy will focus on minimizing driving. The plan also states that transportation impact fees (TIFs) collected from future commercial and residential development projects will be directed toward traffic safety improvements, and away from expanding roadway capacities for car traffic. People walking in San Mateo are most likely to be struck by drivers downtown and along El Camino Real, according to the city’s collision data. Image: City of San Mateo

“The old notion used to be that if you had increased congestion on a street, the only answer was to build more street,” said City Council Member David Lim. “It’s something called induced demand — all you do is encourage more people to drive, so you really haven’t solved the problem.”

The Sustainable Streets Plan cites a 2008 report showing that less than one percent of the funds generated by the city’s TIF were scheduled to be spent on bike and pedestrian transportation projects. By assessing the fee based on projections of vehicle trips generated by new development projects, a financial incentive would be created to minimize traffic by providing free transit passes, unbundling parking fees from rent, and providing car-share services. San Francisco is planning a similar overhaul, but it’s been put on hold for the state’s LOS reforms.

“A community thrives when it plans for the future,” wrote Greenbelt Alliance Regional Director Michele Beasley in a letter of support [PDF]. “Recent demographic shifts point to the need to create streets that are safe for people who choose to walk, ride their bike, and take transit.”

Next, city transportation planners are to incorporate the goals and policies of the adopted Sustainable Streets Plan into the city’s General Plan, to be updated after an extensive public planning process beginning later this year.