Study: As cost of sugary drinks go up, sales go down People bought fewer sugary drinks when the price was higher than no-calorie or low-cal drinks. 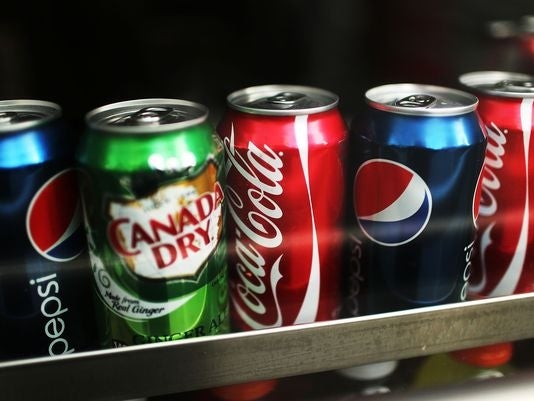 Raising the cost of high-calorie beverages by a few cents — and highlighting calorie content in places where they are sold — decreases sales, a new study shows.

This research comes after much discussion in recent years about trying to combat the nation’s obesity crisis by adding extra taxes to the cost of sugar-sweetened beverages, sometimes called a “soda tax.”

Researchers at Harvard conducted a study in the cafeteria of a financial services company. They increased the price of high-calorie beverages (those that contained 150 calories or more per container), mostly soda, lemonade, whole chocolate milk, and some juices, by one cent per ounce.

“We chose this amount because this is what public health experts say might be used as a tax on sugary beverages,” says Jason Block, the study’s lead researcher and an assistant professor at Harvard Medical School.

The increased price resulted in a 16% decline in sales of high-calorie beverages, says Block, who is reporting the findings Thursday at the annual Obesity Society meeting in Atlanta.

In the second part of the study, Block and colleagues arranged beverages in columns based on their calorie content in the coolers where they were sold. Researchers put signs on the cooler at the top and bottom for each of the three types of beverages and listed the calorie range for each one. Result: High-calorie beverage sales decreased by 11%.

“Both increasing the price of higher-calorie beverages and changing how we displayed them had a similar effect on decreasing sales of these drinks,” Block says.

Barry Popkin, a nutrition professor at the University of North Carolina-Chapel Hill and one of the nation’s top experts on beverage consumption, says, “This (price) study is consistent with other research which shows that people are responsive to small price increases of one or two cents per ounce in sugar-sweetened beverages and will reduce their consumption of them.

“When it comes to beverages, there are many choices that are far better than any type of soda. I prefer Americans drink water or unsweetened or lightly sweetened coffee or tea,” he says.

Kelly D. Brownell, dean of the Sanford School of Public Policy at Duke University and a proponent of soda taxes, says, “This is an important study because it documents the level of benefit likely to occur with public policies on taxing and labeling foods. It is strong support for the public benefits of a soda tax in particular.”

But Chris Gindlesperger of the American Beverage Association, an industry group, says, “People don’t support taxes on soft drinks, and they understand that taxes won’t do anything to address obesity. That’s why the public policy debate has moved on from taxes and onto real solutions.

“We are already putting the full calorie count on the front of all our packaging, and on vending machines, too. We’re empowering consumers to make the choices that are right for them, and providing them with an array of beverage options.”

In yet another study, Block and colleagues labeled foods and beverage items in a hospital cafeteria with traffic-light colored labels: Green for the healthiest foods based on their calories and content of fat, sodium and sugar. Foods with the worst nutrition content had red labels. Yellow foods were in between.

Initially, the program increased sales of healthiest items across all categories including beverages, side dishes and entrees, but the effect dwindled over the course of a year, he says. “We saw no change for the red-labeled entrees or drinks. They didn’t decline, and red side items, such as french fries, increased,” he says.

“People made initial changes that wore off over time,” Block says. “Changing eating habits is hard. To make a sustained change, there has to be a continued focused effort on both the part of the retail establishment and consumers.”